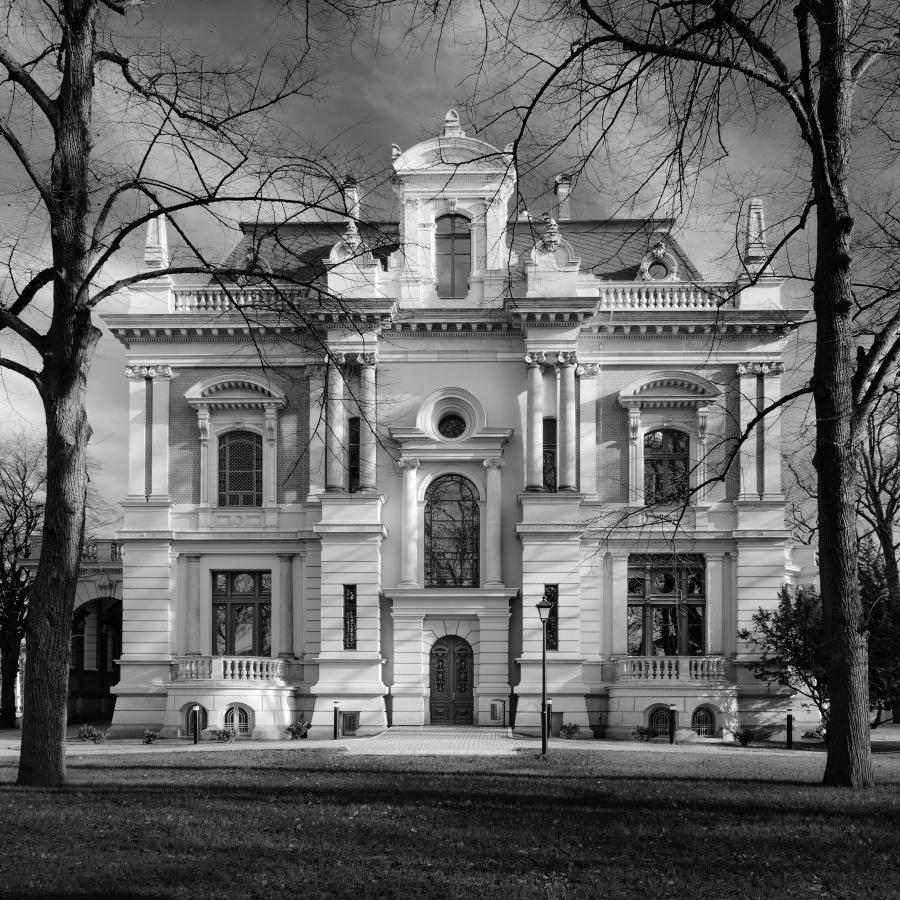 I started working at the Youth Palace – Pomeranian Education Center in March 1994 as a methodological advisor in art education. At that time I was completing my project, "School Gallery Corridor", at Primary School 51 located at ul. Jodłowa 21. It was the first such gallery of works by children, amateurs and professionals. The aim was to familiarize children with art and teach them to respect creative work at various levels. The gallery became a model for all other institutions, which representatives from Szczecin Board of Education repeatedly emphasized. Furthermore, at the same time, I participated in another two innovative projects conducted by a group of art counsellors operating at the Teacher Professional Development Centre at the Youth Palace. These courses focussed on the implementation of school theatre performances organized for teachers from the voivodeship and in experimental activities for preschoolers conducted for four parallel groups of children by four specialists – 15 minutes per session and each consisting of various activities (rhythm, vocal, French and art) devoted to one topic. The results of these classes prompted the director's team to later think about establishing the Preschooler Academy in the Youth Palace.

In December 1994, I became the deputy director of the institution, and I directly supervised artistic subjects at the Teacher Professional Development Centre along with the "MY GALLERY", the Events Department, the AMFILADA Gallery, and the Artistic Department, which were later established within its structures. I also conducted my art classes with preschool children and their parents.


The Events Department encouraged and helped to develop the skills of the class participants through regular Saturday and Sunday "Palace Concerts'', theatre performances, both for children and professionals (invited by me, for example, as part of cooperation with the "Malta" Festival, "Pod Górkę" Theatre or Mikołaj Grabowski). Various competitions such as "Anyone can sing'', film reviews and festivals combined with the Film Discussion Club led by Doland Paszkiewicz, and many other similar activities also took place. In addition, every year, many important outdoor events were organized for Children's Day at the Summer Theater and St.Nikolaus Day in the Provincial Sports House (both events are currently carried out by "Słowianin" Community Centre because their originator was its current Director, Jacek Janiak, and in those years an employee of the palace's events department). The dedicated and highly talented department team, apart from the aforementioned Mr. Jacek Janiak,also included Ms Danuta Grochowska, Ms Wioletta Dąbrzalska, Ms Anna Garlicka, Ms Elżbieta Łagut, Agnieszka Włodarczyk, Ms Małgorzata Galant, Ms Małgorzata Januszewska, Ms Zofia Stępniak, Ms Beata Terefenko, Ms Michał Pieńkos Mr. Krzysztof Machowski, Mr. Cezary Kurmiel. The Palace Cafe, run by Ms Iwona Tararako, who once a month organized performances of folk groups,hosted and introduced folk traditions and culture to young people, worked excellently. It displayed permanent art exhibitions of teachers' artwork both amateurs and professionals.

The duties of the Events Department also included the organization of winter and summer holidays for children and youths in the form of workshops. During my work, there was also a need to organize activities for children who stayed during their holidays and vacation in the city. Usually, they were no regular participants in the classes. Therefore, I received a directive from the facility director, Ms Jolanta Zorgi-Pieńkos, to develop a role for the Palace to fill in such circumstances. This led to the creation of both "Feriada" and "Summer Action", which to this day operate in an almost unchanged form and have become its tradition.

The activities of the AMFILADA Gallery included professional activities carried out by the curator of exhibitions, Lech Karwowski, who was replaced at the end of my work at the Palace by Agata Zbylut and then by Ms Sonia Żarkowska.
Contemporary art exhibitions and contact with professional artists greatly influenced the creative development of the participants of classes held at the palace. For ten years, this professional gallery also housed the "MY GALLERY" run by the art education methodologist Ms Marta Kępińska-Mielnick and featured works of children, teenagers and teachers. Both galleries were rather special thanks to their locations. The first floor of August Lentz Villa especially left everyone who saw them for the first time breathless. They gave wings to both conscious and professional artists as well as those who had just entered the creative paths of art.

Art, theatre and journalism studios also flourished here. The theatre classes were conducted by actors from Szczecin’s drama theatres namely Ms Danuta Chudzianka, Ms Nina Grudnik and Mr Mateusz Kostrzyński and thanks to them, the highest quality of classes were guaranteed. This was evident by the Saturday-Sunday presentations held in the interiors of the August Lentz Villa. The combination of literary and journalistic activities with the work of the palace library, managed by Ms Nela Bęczkowska in cooperation with the excellent Polish teacher, Ms Danuta Rodziewicz, and journalists, Mr Jacek Błędowski and Ms Joanna Klimowska, turned out to be of a particularly high standard. Thanks to Mr Jacek Błędowski, who from 1991 and for the next 15 years ran the Young Journalists Club at the Youth Palace, the most interesting works by young authors were published by Głos Szczeciński and Kurier Szczeciński.

During my seven years at the Palace, I also carried out a unique project on its 45th anniversary. It was a performance written and directed by myself, entitled "Marta at the Palace", where all the studios presented themselves. Over 300 young artists performed on the stage of the Szczecin Opera at the Castle. In implementing this event, apart from the outstanding teachers employed at the Youth Palace, I was further supported by the professional artists – composer Mr Zbigniew Rymarz, set designer Ms Dorota Obukowicz-Szafrańska, and actor and choreographer Mr Arkadiusz Buszko.

In the last period of my work as deputy director, education reform began to enter into effect. Therefore, I took an active part in defining the new mission and creating the statute of the institution and its regulations in preparation for new rules regarding changes in the status of teachers and the greater importance of the Parent Council.
In August 2001 I left my position with the Youth Palace.
After 16 years, in September 2017, I returned to the facility as its director, but this is a different story and a different place on the city plans because in the meantime there had been a move from the buildings at al. Wojska Polskiego to the building at al. Piastów.