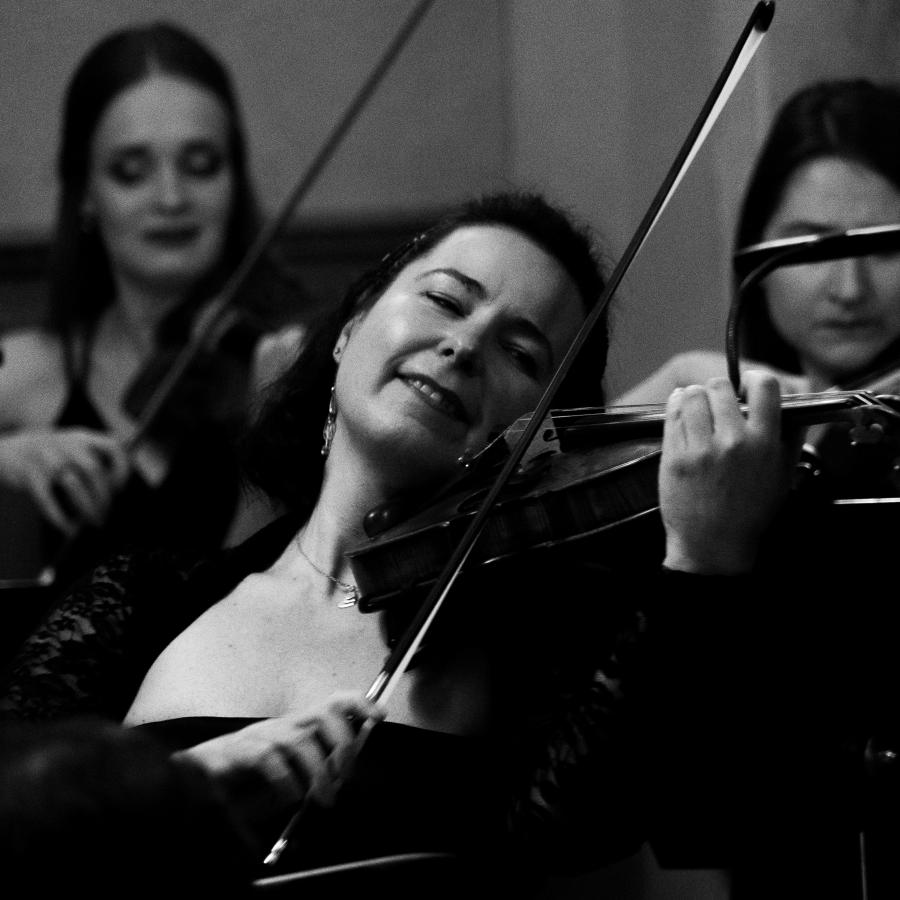 Some concerts are especially remembered, sometimes for a lifetime. I am convinced that many music lovers will remember for a long time the recent show from the famous and excellent series "Great Concertmasters", which took place in the Lentz Villa in Szczecin. The evening with the performance of the Baltic Neopolis Orchestra and violin virtuoso – Melina Mandozzi showed how great the power of music is, which not only touches or gives joy but can also raise spirits.
A few hours before the concert began at the Lentz Villa, the world heard the news that the Russians were bombing Lviv. It was not immediately known whether only military facilities were destroyed or rather residential buildings or monuments. So before the performance could begin, the audience had been talking almost exclusively about this event. Many music lovers' faces showed nervousness and worry. It is not surprising because Lviv occupies a special place in the hearts of Poles, especially the inhabitants of Western Pomerania. After all, in 1945, it was from eastern borderlands that many people came to Szczecin and its vicinity.

My family is also connected with Lviv and nearby Stanisławów (today, Ivano-Frankivsk). A few years ago, I went to Ukraine, to Lviv, for the first time. So the news of the bombing of this beautiful city made me very sad. In the eyes of my imagination, I saw the demolished opera house, which is probably the most characteristic building in the landscape of Lviv, but also the Armenian Cathedral, the citadel and the devastated Łyczakowski Cemetery.

Before the concert, music lovers heard from the stage not only what songs would be played in a moment but also an assurance that despite the bombing of Lviv, the local philharmonic hall did not give up the concert scheduled for the same day. "It's not that bad in Lviv, is it?" an old lady sitting next to me asked in a voice full of hope. Then, and immediately, she spoke lowly: "My mother was born in Lviv. I am very agitated by what is happening there. I hoped that Putin would spare this city."

The presenter's words must have calmed down many listeners who came to the Lentz Villa that day. Not only my neighbour in the audience. And then the music came on.

During the performance of the Baltic Neopolis Orchestra, one could hear, among others, a piece by the composer who died in Kyiv a few days ago, Yuri Shevchenko. It was a paraphrase of the melody of the Ukrainian national anthem – entitled "Here we are", a beautiful composition whose overtone was exceptional on that day. In addition, the concert was performed by a cellist from Lviv, whom this orchestra accepted into its internship program and took great care of. The artist came to Szczecin less than a few weeks ago. In Lviv, she worked at the philharmonic mentioned above.

The performance of the BNO with Melina Mandozzi delighted music lovers. The relief for everyone, especially in such a difficult time, was brought, among others, by works of Norwegian composers, including a composition by Edvard Grieg.

The concert reminded me of the first days of the war in Ukraine. Well, then people of culture decided that they would do so after hesitating for a moment whether it would be appropriate – after Russia invaded Ukraine – to organise concerts, album and performance premieres. To hearts' content – recipients and their own.

The aforementioned old lady spoke to me once again, right after the applause for the artists: "This is what I needed today!" – she said. At this point, I thought the same thing.