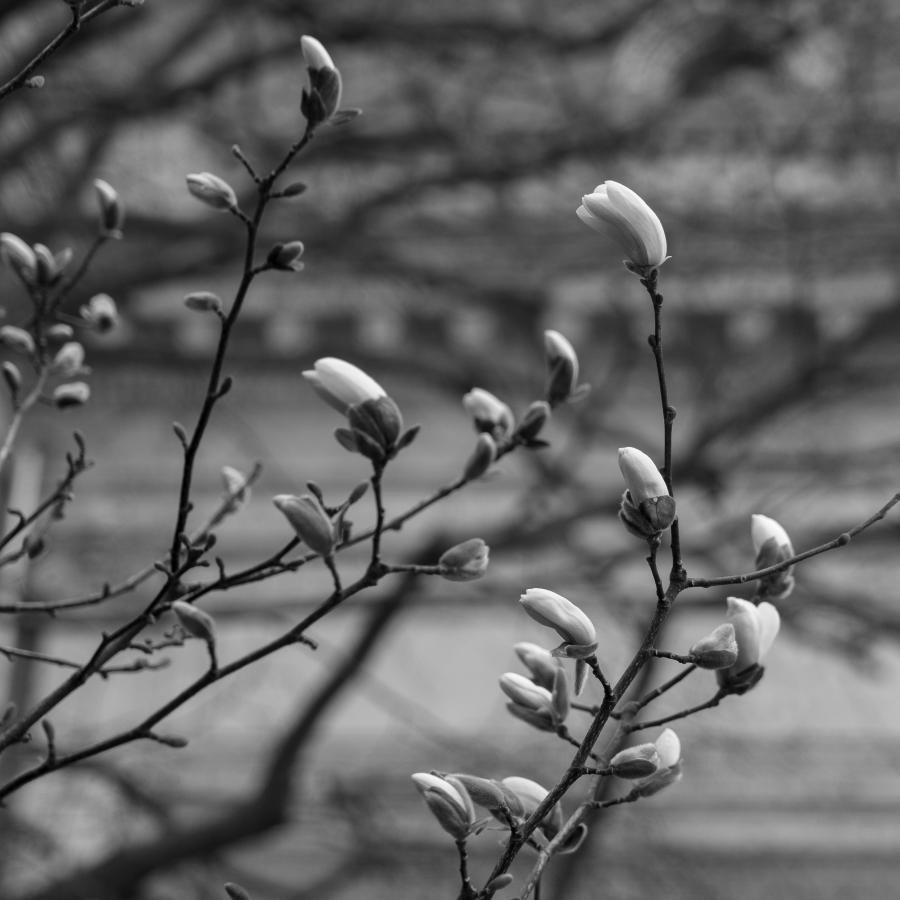 In the garden of the Lentz Villa, a magnolia was planted, which was named Max to commemorate the outstanding architect of the building mentioned above – Max Drechsler. It is not the only natural and historical piece of news coming from this institution. Well, soon, more such trees will appear in the local garden, which will also remind us of influential figures related to the Lentz Villa and the cultural circles of Szczecin.
The new magnolia trees are a kind of return not only to the glory days of the pre-war Westend district, when landscape architects came up with the idea that magnolia would be the symbol of spring in the then Stettin, but also to the times of a few decades ago, when a walk along Wojska Polskiego Avenue, with a lane blossoming trees, aroused probably similar admiration to the one that causes watching cherry trees in bloom in Japan.

Magnolias from the longest street in Szczecin are an inseparable element of my memories of primary school days. It is so as I went to the tram stop right next to the magnolias from the school in Felczaka Street every day. Being then influenced by reading "Anne of Green Gables", I remember that I used to come up with some crazy comparisons to name this amazing view – just like my red-haired idol did. Forgive me, however, for not remembering these youthful metaphors precisely, but they were related to ballet I was fascinated by then. Back then, pink magnolia flowers and the white and purple ones reminded me of ballerinas in tulle skirts, which I saw during my visits to the opera.

I also vividly remember that magnolias were such a magical and beautiful picture for the eyes that even the biggest school thugs, who did not respect any prohibitions or rules, did not destroy magnolia trees. However, syringa vulgaris (i.e. common lilacs) were the plant people would quite commonly tear off. I also would go on trips after school to Żołnierska Street, where the branchy lilac bushes protruded from behind the fence of the Soviet barracks and tear off a twig or two. So it happened that I would come home with an armful of fragrant plants, proud and pale as if I had hunted the mammoth at least.

But not lilac bushes, but flowering magnolia trees are the showcase of Szczecin. However, I think that other spring plants have recently taken over the sceptre of reign in Szczecin: crocuses. Every year, crocus carpets delight strollers, for example, in Jasne Błonia. During flowering, this place becomes an excellent photo atelier. Thousands of inhabitants of Szczecin take pictures of crocuses here. There is even such an unwritten competition on Facebook about who will be the first to post a photo with crocuses and whose frame will be more interesting. I admit that I have surrendered to this crocus madness several times. I think it would be fantastic if magnolias reigned on Facebook again, for Szczecin residents to boast about beautiful frames of these blooming trees, for magnolias to be featured on the Facebook "background photo," and if they had their hashtag on Instagram: #szczecińskiemagnolie. Anyway, the sceptre can change hands. When the crocuses fade, magnolias bloom most beautifully, pleasing the eyes for many weeks.

Although in no other city in Poland, there is so much magnolia blooming as in Szczecin, there are not as many of them as there used to be, even in the post-war years or several dozen years ago. Although this is changing, a project to recreate the historical image of magnolia as a symbol of the city has been underway for several years. Furthermore, over the last few years, as part of the "Szczecin Magnolias" campaign, the inhabitants of Szczecin received several thousand trees as a gift, for example, to be planted in home gardens, nurseries, kindergartens and schools. Therefore, the action of the Lentz Villa, which is to commemorate with trees important figures of Szczecin, fits perfectly into the city's project.

I once read the memories of a pioneer of our city, who, after coming here in 1945, almost collapsed with the enormity of the destruction of Szczecin and was about to move on in search of another place to live when he found today's Wojska Polskiego Avenue. He was so delighted with the blooming magnolias that he decided to stay in Szczecin. He believed that his life in this city, still very ruined at the time, could also flourish like a magnolia. It's a beautiful story, isn't it?

Meanwhile, I am looking forward to the next magnolia tree in the garden of the Lentz Villa. Will it be called August to commemorate the first owner of this beautiful building? Or maybe the plant will be named after the manufacturer's daughter – Margarete? What do you think? Will we admire the magnolia soon, apart from the Max mentioned above, in the garden on Wojska Polskiego Avenue?